Background: The USNS Mercy is the largest floating hospital ship in the world that participates in humanitarian and disaster relief training (HA/DR) missions. For the past decade, the USNS Mercy has participated in multiple HA/DR missions that has provided various levels of surgical treatment. The management of oncology cases has been controversial and current recommendations have discouraged complex cancer cases. We evaluated the experience with surgical cancers encountered during USNS Mercy missions and discuss the ethical challenges in managing such malignancies.

Objective: To determine incidence of surgical oncologic cases performed on the USNS Mercy on two HA/DR deployments. In addition, we plan to discuss the ethical dilemmas in the surgical management of malignancies in such missions.

Methods: During the HA/DR missions in 2012 and 2015, surgical pathology specimens were reviewed and analyzed according to organ system, location, and benign versus malignant diagnoses. Primary endpoints were total number and percentage of malignant cases. Secondary endpoints included demographic data and malignant versus benign diagnoses based on organ systems.

Results: The total cases performed between both missions were 1,530. Operations were performed on both pediatric and adult patients and female patients comprised 45.4% of this group. Thirty-four percent (N=516) of these procedures resulted in at least one patient sample (surgical specimens/biopsies, FNAs, etc.) Thirteen percent of these pathology specimens were malignant. Thyroid operations accounted for the largest number of cancerous cases (N=20), and the second largest percentage of cases related to cancer (36%). The organ system with the largest percentage of malignancies was the parotid and other salivary gland surgeries (N=16) at 37%. Remaining organ system malignancy rates were below 20%.

Conclusions: Management of malignant neoplasms during HA/DR missions is an ethical challenge in low-middle income countries (LMICs). Reasons include poor follow-up, limited resources and inadequate access to care, to surgeons and oncologists in LMIC healthcare systems. Long-term outcomes of these patients are not available, highlighting one of the primary concerns regarding the treatment of LMIC cancer cases. Despite current policies to minimize such cases, 13% of surgical pathologies were found to be malignant. Contingent plans must be considered in managing these patients, particularly those cases with head and neck malignant diagnoses, in order to provide better quality care and improved outcomes. This data should aid in future planning in supporting and treating cancer patients on humanitarian missions. 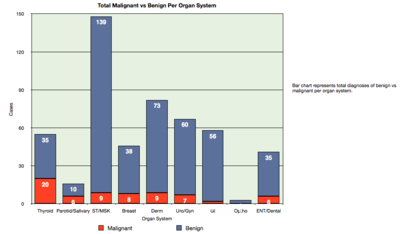 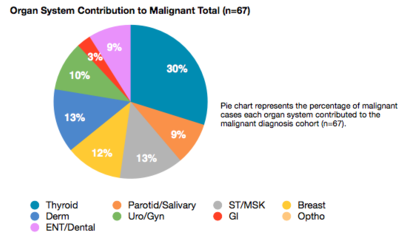 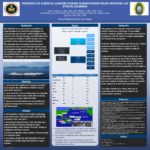