INTRODUCTION—Single port laparoscopic surgery (SPLS) has gained popularity albeit remaining a controversial topic. SPLS allows the surgeon to complete entire surgical procedure, like partial colectomy, through a peri-umbilical incision. Modifications of operative technique can allow the performance of colectomies using a single port, without additional access sites and without mini-laparotomy. An optimal indication for SPLS procedure could be the laparoscopic assisted right hemicolectomy—where the planned extracted site also serves as the site of the single port device. Proliferation in publications of SPLS has occurred since 2007. However, since the inception of SPLS, there has been limited evidentiary support asserting its benefits on incisional hernias. Through retrospective investigation of incisional hernia occurrences and numerous possible associated comorbidities, we propose a higher incidence of incisional hernias associated with SPLS right colectomies. 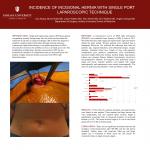