INTRODUCTION: The incidence of incisional hernia(IH) after laparoscopic colorectal surgery has not decreased compared to open surgery. However, IH may be affected by the choice of specimen extraction site(SES) incision. The objective of this study was to perform a systematic review and meta-analysis comparing the incidence of IH after midline and off-midline SES incisions in patients undergoing laparoscopic colorectal surgery.

METHODS: A systematic search was performed according to PRISMA guidelines to identify all comparative studies published from 01/1991 to 08/2016 that reported the incidence of IH after midline and off-midline(transverse or Pfannenstiel) incisions in patients undergoing laparoscopic colorectal surgery. Case series and studies reporting the IH after stoma site extraction, SILS, or NOTES were excluded. The two main comparative groups were midline and off-midline(further subdivided into transverse and Pfannenstiel) SES incisions, with the incidence of IH as the main outcome measure. The MINORS instrument was used for quality assessment for observational studies. Weighted estimates were calculated using a random effects model.

CONCLUSIONS: Midline incisions for the SES in laparoscopic colorectal surgery are at significantly higher risk of IH compared to off-midline(transverse or Pfannenstiel) incisions, but these data are poor quality and heterogeneous. 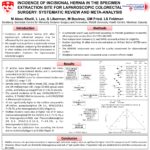