Background: Radiofrequency ablation has emerged as an alternative therapy for treatment of HCC and liver metastases that are unresectable (Extra-hepatic disease ruled out), HCC patients as a bridge for liver transplantation and also Recurrent HCC (following limited resection. Though RFA has advantages of being widely available and achieves high rates of local control, it has inherent limitation of not suitable for surface lesions. We propose our technique and results to overcome this shortcoming of RFA making it a safe, feasible and reproducible technique.

Methods: It is a retrospective analysis of prospectively maintained database of 13 patients, who underwent laparoscopic RFA for various indications during 2011 to 2016.

Results: Of the 13 patients who underwent laparosocpic RFA, 11 were males and 2 were females. The mean age was 64.8 years (range 51 – 74 years). The etiology was attributable to HBV, alcohol, HCV in three, six and two patients respectively. Two other patients had cryptogenic cause. Total number of lesions managed were 32 as some patients had multiple lesions. Among these, twelve lesions were sub-capsular and were managed exclusively with Habib probe. Eight patients had both sub-capsular and deeper lesions (20 in total). These patients were managed with Habib probe for the superficial lesions and the coneventional Umbrella probe for deeper lesions. Post-operatively transient raised LFT was seen in 4 patients and post-procedure pyrexia in two. Tumor recurrence was seen in a total of 2 lesions managed with Habib probe and four lesions with both habib and umbrella probes. The mean post RFA perios for recurrence was 21.4 months. 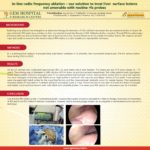