Of 257 consecutive patients we reviewed 178 available videos of laparoscopic cholecystectomies. Videos before and after the teaching interventions were reviewed by a senior surgical resident and a GI surgeon on whether CVS was reached or not (360° view on cystic duct, two window view between cystic duct and cystic artery and freeing of 1/3rd of the gallbladder from the liver). We prospectively collected demographic data, data of the procedure and complications.

By giving lectures and providing teaching information and videos to surgeons CVS was reached more frequently. Even though there was no significant improvement we believe that to improve the complication rate, especially major bile duct injuries, after laparoscopic cholecystectomies a teaching intervention is useful. Although it was not significant, CVS was reached more often after the teaching interventions (81% vs. 69%). Furthermore, less complications were observed. 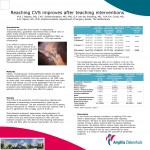