Aims: Historical series of oesophagectomy for oesophageal cancer have reported high mortality and morbidity. There have been considerable changes to management during and after oesophagectomy over the past two decades. This study aimed to assess the impact of those changes on early outcomes after surgery in a non-teaching hospital setting.

Methods: After 2009, a multi-disciplinary, goal-directed peri-operative management plan was developed and commenced at our institution for all patients after oesophagectomy. Surgical changes included two-consultant operations for all cases and transition to laparoscopic completion of the abdominal component of surgery. Anaesthetic developments included a limitation of the number of consultant anaesthetists involved, early extubation after surgery, optimisation of analgesia and use of epidural anaesthesia, early physiotherapy input, early mobilisation (post-operative day 1), daily senior review and early nutritional support via TPN rather than feeding jejunostomy. Early operative outcomes, length of ITU stay and morbidity were recorded for all patients and results from 2006 to 2009 (prior to the changes) and 2010 to 2011 (after the changes) were compared.

Results: The two cohorts of patients were comparable in age, stage of tumour and physiological status, as assessed by P-Possum sociring systems. From October 2006 to October 2009, 51 patients underwent oesophageal resection. All operations were carried out by one consultant present and only 8 patients were extubated at the end of surgery. Only 1 patient was mobilised on the first post-operative day. Median critical care stay was 8 days and in-hospital mortality was 21%.
From January 2010 to December 2011, 29 patients underwent oesophagectomy. All operations were carried out with two consultant surgeons present. The majority of patients were extubated immediately after surgery and were mobilised on the first post-operative day. There has been 0% mortality for this second cohort of patients.

Conclusions: Implementation of a goal-directed, multi-disciplinary, specialist, consultant-led management algorithm during and after oesophagectomy has resulted in considerably improved survival in a non-teaching hospital setting. 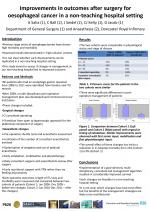