Introduction: The aim of this study was to evaluate the outcome in obesity-related co-morbidities following bariatric surgery in an ethnic Chinese population.

Methods: All patients who received bariatric procedures from our institution were included in this study. Prospective data collection included patient demographics, postoperative weight loss and changes in obesity-related co-morbidities. Comparison was made between different bariatric procedures and overall outcome in related co-morbidities was evaluated. All data were retrospectively analyzed. 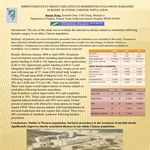