Methods and Procedures: We performed a retrospective review of all patients who underwent a laparoscopic segmental colectomy by one of four colorectal surgeons at an academic institution from 2012 to 2013. No formal enhanced recovery pathway was used in any patient. Patient demographics, operative characteristics, and postoperative factors were examined. A multiple linear regression model was used to examine the impact of various factors on length of stay, while controlling for confounding variables. Systemic inflammatory response syndrome (SIRS) was defined using Society of Critical Care Medicine consensus definitions.

Results: A total of 127 patients underwent a laparoscopic segmental colectomy. When controlling for confounding variables, ileus, postoperative complication, or a SIRS response were associated with 2.67, 1.16, and 0.42 additional hospital days respectively. Patients who experienced a brisk diuresis immediately following surgery were more likely to be discharged early with, each additional liter of urine output on postoperative day 1 associated with a 0.23-day decrease in LOS (p = 0.006).

Conclusions: In the absence of postoperative ileus or overt complication, patients who do not exhibit a SIRS response, and have a brisk urine output on POD 1, may be targeted for early hospital discharge after laparoscopic colectomy. 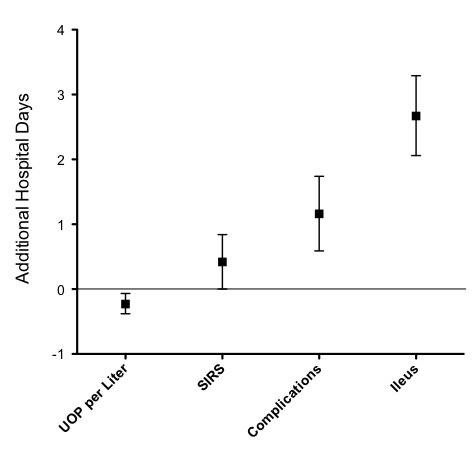