Background: High-resolution manometry (HRM) identifies three subtypes of achalasia.  Type II, with pan-esophageal pressurization (PEP), and Type III with distal spastic contractions appear very different on HRM to the flaccid body and lack of PEP in patients with Type I achalasia.  Per-oral endoscopic myotomy (POEM) relieves the outflow obstruction at the lower esophageal sphincter (LES) without adding new resistance from the addition of a partial fundoplication.  The aim of this study was to evaluate HRM changes in patients with achalasia Types II and III after POEM.

Methods:  We reviewed the records of all patients with achalasia Types II and III that underwent POEM and had both pre and post-operative HRM, upper endoscopy and timed barium swallow (TBS).

Conclusions:  POEM leads to significant relief of LES outflow resistance and resolution of PEP in most patients with Type II achalasia.  Persistent PEP was associated with a higher post-POEM IRP but not resting pressure, and similar symptom relief, improvement in TBS esophageal emptying and frequency of esophagitis compared to those with resolution of PEP in the short term.  Long-term implications of persistent PEP will be important to ascertain. 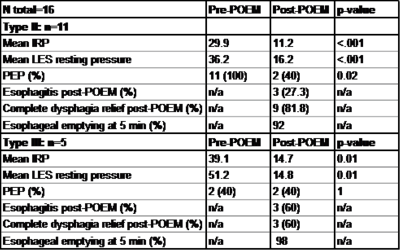 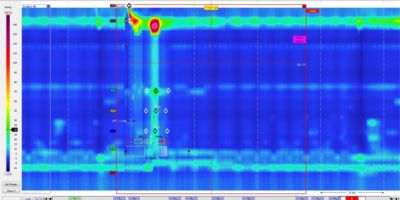