Background: In recent years, single port surgery (SPS) has gained great interest and popularity. Actually, single incision laparoscopic cholecystectomy (SLC) can be safely completed in non-obese patients. However, SLC must be carefully performed in obese patients because obesity is generally associated with increased surgical problems such as access difficulty, instruments conflict and postoperative complications. The aim of this study is to assess the early outcome of SLC in patients with abdominal obesity as compared to the non-obese patients.

Study Design/Method: A total of 393 patients underwent SLC between April 2009 and June 2016 at the Department of Surgery of Juntendo University Urayasu Hospital.

The patients were divided into obese, overweight and non-obese categories using BMI as the criterion.

Procedures: 2 cm Z type skin incision is made, and access platform is placed in the small umbilical incision area. All SLC procedures were performed using a similar surgical technique to our standard laparoscopic manner. However, we often use the additional one port when we encounter a technical difficulty in maintaining a good working space due to a visceral fat accumulation.

Results: 393 SLC procedures were performed. Of them, 33 patients (8.4%) were obese, 118 patients (30%) were over-weight and 242 patients (61.6%) were non-obese. Patient characteristics, such as age, gender and disease of gall bladder were similar among the three groups. There were no significant differences in bleeding volumes, intra- and postoperative complications and hospital stay. However, obesity was associated with increased operative time compared with non-obese (120 ± 70 vs. 90 ± 42 min, p < 0.05).

We tended to apply the additional one port technique in the obese compared with non-obese (39.4 vs. 18.2 %, N.S.). Conversion to conventional laparoscopy was needed in two patients in non-obese, and in one patient in obese (N.S.). There were no conversions to open surgery.

Additional one port technique enables us to safely complete SLC in difficult cases among obese patients. 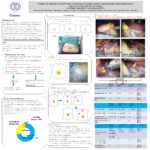