INTRODUCTION: One of the technical challenges in laparoscopic Heller myotomy (LHM) for achalasia is to keep hemostasis during the dissection of circular muscles, since oozing from the muscular cut ends often compromises surgical exposure and might lead to esophageal mucosal perforation. VIO 300D (ERBE, Tübingen, Germany) is modern high frequency electrosurgical unit, which provides advanced hemostatic ability compared to conventional monopolar electrosurgery. The aim of this study was to determine the clinical impact of VIO 300D on LHM.

METHODS: This is an IRB-approved, historical comparison study enrolling 57 consecutive patients (1994 – 2012) in a single institution. LHM with Dor anterior partial fundoplication was attempted in all patients using either standard 5-port-technique (early 40 cases) or single-port-technique (latest 17 cases). A standard esophagocardiomyotomy was performed with hook-tip surgical probe, powered by conventional electrosurgical generators in the first 30 patients (control group), and VIO 300D in the latest 27 patients (VIO group). In VIO group, the circular muscle was first coagulated with “SOFT COAG” mode and then cut with “ENDO CUT” mode. A leak test was performed and laparoscopic repair was attempted in positive cases. The two groups were compared in terms of demographics, operative and postoperative outcomes.

RESULTS: There was no significant difference in age, sex, disease severity, and preoperative treatment between the two groups. LHM was completed without conversion, except for one case in the control group, in which inappropriate retraction of left hepatic lobe caused injury to the left hepatic vein resulting in significant hemorrhage. Mucosal perforation was encountered in 9 patients in the control group, whereas none in the VIO group (p<0.01). Based on the video review, the oozing episodes from the myotomized tissue were less experienced in the VIO group compared to the control group, though no statistical significance was shown in the estimated blood loss and the operating time. No major late complications were encountered in the series, with comparable time to resume diet and length of hospital stay in the two groups. 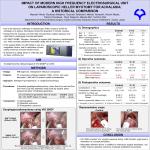