Introduction: Sleeve gastrectomy is estimated to be the most common bariatric operation performed today. However, the impact of laparoscopic sleeve gastrectomy (LSG) on gastroesophageal reflux remains undetermined with conflicting results in published data. The aim of this study was to examine the impact of LSG on gastroesophageal reflux disease (GERD).

Methods: Retrospective data analyses were performed on all patients undergoing LSG from 2013-2015 at a single institution. The patients were stratified based on the presence or absence of preoperative GERD. Presence of GERD was defined by symptoms, therapy with an anti-reflux medication, or a documented diagnosis of GERD. GERD presence was then determined at last follow up appointment within 24 months. Bivariate frequencies were compared using the Chi-squared test and the relationship between GERD and weight loss were assessed with Student’s t-test. 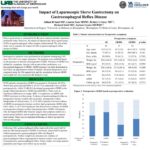