Impact of Gender on Early Surgical Outcomes After Laparoscopic Surgery for Rectal Carcinoma.

Methods: A total of 1073 patients with carcinoma of the rectum and anus, who initially underwent laparoscopic surgery, were collected from 28 institutions and retrospectively reviewed. Short-term surgical outcomes were compared between male and female patients. 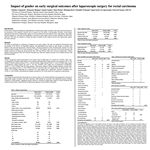