Ileostomy Reversal After Minimally Invasive Colorectal Surgery: Can It Still Be Considered a Minor Procedure?

Introduction:  Ileostomy reversal is often considered a relatively minor surgical procedure in comparison to the initial colorectal resection and anastomosis. However, no studies have been done comparing outcomes between these two procedures. The aim of the study was to compare and contrast the morbidity and mortality of ileostomy reversal with the original minimally invasive colorectal surgical procedure that required ileostomy creation. In this age of minimally invasive and robotic surgery, we hypothesize that the differences in morbidity between procedures may have decreased.

Methods and Procedures: 89 consecutive patients undergoing laparoscopic and robotic-assisted colorectal surgery followed by interval ileostomy reversal, from June 2009 to August 2013, were selected from a retrospective database. The cohort was comprised of 47 laparoscopic and 42 robotic cases, performed by 4 surgeons at a single institution. An internal comparison was done comparing outcomes of the index procedure with respective ileostomy reversal for each patient. Index procedures included low anterior resection (52.8%) proctocolectomy (39.3%), sigmoid resection (2.2)%, colectomy (1.1%) and small bowel resection (2.2%). Data was analyzed for postoperative outcomes and 30-day morbidity and mortality. Statistical analysis was done using Chi square test, student t-test, analysis of variance and Fischer’s test where applicable. GraphPad Software, Inc. 2013 was used. Follow up was studied for a period of 30 days after the day of the procedure.

Results: 42% of patients were female and the mean age was 58 years old. Cancer was a primary diagnosis in 57% of patients. Other diagnoses included inflammatory bowel disease (29%), Familial Adenomatous Polyposis (3.3%) and diverticulitis (2.2%). Perioperative chemotherapy was administered in 41.5% of patients, and 27% received perioperative radiation therapy. The mean duration of the ileostomy prior to closure was 107 days. Median length of stay (LOS) was significantly longer for the index procedure compared to the ileostomy reversal (6.0 days versus 4.0 days, p=0.0001). Mean estimated blood loss was higher (153 ml versus 25 ml, p=0.0001) in the index procedure. There were no statistically significant differences in outcomes between groups for cardiac complications, bleeding, ileus, wound infection, urinary retention and urinary tract infection. There were no mortalities in either group. In a subset analysis of patients with a high BMI (>30, n=18), there was no statistically significant difference in LOS between the index procedure and the ileostomy reversal (5.0 versus 4.0 days, p=0.4), while patients with a lower BMI (<30) had a significantly lower LOS (6.0 versus 4.0, p=0.01) for the ileostomy reversal.

Conclusion: In the setting of minimally invasive colorectal surgery, we find that a subsequent ileostomy reversal has equivalent morbidity and mortality, but a shorter hospital stay and less blood loss. In patients with a higher BMI, however, ileostomy reversal was found to be equivalent to the initial colorectal resection in length of stay, blood loss, morbidity and mortality. 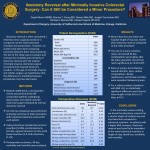