Ileostomy Reversal After Left Colonic or Rectal Resection for Cancer: Does the Initial Approach (laparoscopy Versus Laparotomy) Affect Outcome? 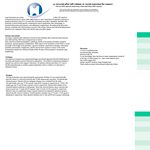