Methods: All patients undergoing anti-reflux surgery are entered into a prospectively maintained database, including one year post-operative symptom scores. After obtaining IRB approval, the database was queried to identify patients who underwent primary anti-reflux surgery and were at least one year from surgery. Post-operative severity of dysphagia was evaluated using a standardized questionnaire (scale 0-3). Patients with grade 2 and 3 were defined as having significant dysphagia. 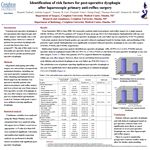