Introduction:
ICG (indocyanine green) infrared imaging has been proposed as an alternative to classic intra-operative cholangiography, but has not been accepted in clinical use due to inadequate image quality. The purpose of this study was to determine the minimum image quality required for clinical use. A baseline measure of detection threshold was determined using the classical psychophysics Method of Limits, while the performance in identification of clinical biliary conditions was determined using Signal Detection Theory.

Results:
The threshold of detection was determined to be at a contrast ratio of 1.35-1.09:1. The average d’ (sensitivity) was 2.51±0.72 with a criterion level of 1.77±1.13. The optimal beta (decision criterion) for detection in this study was 0.143. The probability of correct identification of each clinical condition averaged 78%, with the obstructive state having the highest identification rate of 79.8%.

Conclusion:
Dye in this study could be visually seen even at low concentrations. Detection rates of pathological conditions were high (78%) although there remained a number of false negative findings. Post image processing should be considered to decrease the threshold of detection and improve condition identification rates. In the era of increasing laparoscopy and robotic surgery, ICG may prove to be the option of choice for common bile duct identification but further refinement of the technique is necessary. 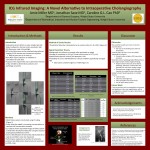