Objective: Despite the many advantages of minimally invasive surgery (MIS), traditional image display has a substantial limitation: the dependence of the entire surgical team on a single telescope viewpoint. This set-up eliminates peripheral vision of the operative field, prevents multitasking, and may even endanger the patient by providing a suboptimal view that omits critical parts of the field. We have developed an individualized, instrument-driven laparoscopic image display system that allows all members of the surgical team to simultaneously control their view of the operative field.

Methods: The image navigation software program was written in Python, numpy, OpenCV, and OpenGL. The video stream from a standard endoscope (or, in the FLS® training model, a USB camera) is split into daughter windows that are centered on the tips of up to four color-coded endoscopic instruments. This allows each surgeon the freedom to zoom in on the surgical target or zoom out to obtain a wide-angle view of the operative field. The main advantages of this system are: 1) the opportunity to multitask during MIS procedures; 2) an individualized, optimal view of the surgical field for all; and 3) freedom from suboptimal, drifting or shaky image capture by the endoscopic camera. Other major advantages of this technology are its ability to be grafted onto existing endoscopic towers and its independence of any specific brand of endoscopic system.

Results: Preliminary in vitro testing with the FLS® endotrainer has shown that standard, two-operator tests (such as bead-passing) are performed faster than with a standard single image display – and that the differences are more pronounced for experts than for novices.

Conclusions: This suggests that the new technology not only shortens the learning curve for novice users, but also offers added possibilities over standard MIS. Further development of robust prototypes will allow in vivo testing and production as a “plug-and-play” device to enhance current laparoscopic and other procedures. 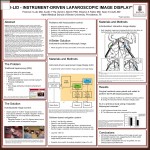