OBJECTIVE:
Several novel approaches have been described for resection of gastric masses through minimally invasive surgical intervention. However, lesions in the cardia near the gastroesophageal junction still pose a surgical challenge. These lesions historically have been resected with a distal esophagectomy or proximal gastrectomy, or with an open operation with consideration of fundoplication. The following case reports describe an innovative surgical technique of endo-laparoscopically assisted gastric resection for lesions in close proximity to the gastroesophageal junction.
DESCRIPTION OF METHODS:
Intraoperative endoscopy was performed to locate the mass and “stent” the lower esophageal sphincter area. The mass of both patients reported, was located endoscopically and laparoscopically, in juxtaposition to the LES on the gastric side.
Laparoscopy was performed and sutures were placed on either side of the anterior wall of the stomach and the stomach was opened with the Harmonic scalpel. The gastrotomy was kept open with the gastric retraction sutures passed through the anterior abdominal wall. A suture was placed through the mass for retraction. The laparoscope was introduced into the gastric lumen and an endoscopic stapler was passed around the base of the lesion. Serial firings were used transgastrically to remove the mass from the interior/mucosal aspect of the stomach. The mass was then placed in an endo catch bag and brought out through the umbilical incision. The gastrotomy was closed with a running 2-0 Vicryl suture and 2-0 silk sutures were used to imbricate the suture line in a Lembert fashion.
Intraoperative endoscopy was subsequently performed to assess the lower esophageal sphincter and to assess for leak. The GE junction appeared intact with no eructation of air. In one of the patients, a Dor fundoplication was performed, given the proximity of the resection.
CONCLUSIONS:
The gold standard for treatment of gastric subepithelial tumors has been surgical resection. However, developments in the realm of endoscopy and laparoscopy have revealed the potential for novel surgical and cooperative approaches to gastric resection. Endoscopic submucosal dissection and laparoscopic and endoscopic cooperative surgery have developed various approaches to resection of gastric lesions.
While endoscopic dissection techniques have made many advances in performance of minimally invasive gastric resections, the depth of invasion and proximity to the GE junction may necessitate further surgical intervention, which cannot be addressed with currently described techniques. In the past, these lesions have commonly been resected through the use of total or partial gastrectomy, transgastric enucleation, or wedge resection, and may interfere with LES function. Care must be taken to prevent stricture, vagal nerve injury, and reflux. The described novel surgical technique potentially permits further minimally invasive intervention, without disruption of the GE junction.
Small to moderate sized gastric lesions such as these are amenable to resection with minimally invasive techniques. The method described in this case series eliminates the risk of perforation, and introduces new possibilities in the surgical intervention of early, small to moderate sized, or subepithelial gastric tumors near the GE-junction. 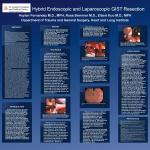