How Many Cases Do You Need to Achieve Competence and Proficiency in Total Extraperitoneal Groin Hernia Repair? 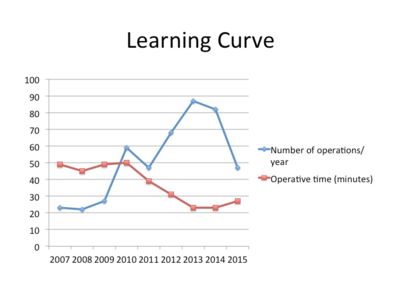 Introduction: My aim is to present the learning curve of total extraperitoneal groin hernia repair in a prospective registry of 462 cases by a single surgeon over 9 years.

Methods: Prospective data collection of age, gender, ASA status, occupation of patient, type of hernia found during the operation, complications, and operative time of the procedure were recorded. Follow up and return to normal activities were also recorded.

Most of the cases were planned as day cases; this was achieved in 87% of the patients. Of all the hernia sides operated upon, 11% were recurrent hernias.

Operative findings showed 11% of the cases were bilateral hernias, 40% of hernias were direct, 56% were indirect. 4% were femoral and Spigelian hernia. Significant lipoma of the cord was encountered in 25% of the cases.

Recurrence rate was 1%. Seroma formation (19%) was the commonest complication. Other complications include acute urinary retention 6%, return to theatre for port site bleeding in one case and persistent groin pain in 3% of the patients.

Conclusion: Operative time is a useful surrogate measure for competence and proficiency. Number of procedures performed per year as well as a record of complications should also be considered. Once competence achieved, the procedure is safe, consistent and carries benefit to the patients. Competence is related to total number of procedures performed within a year (probably 20 are needed), Proficiency is usually achieved after performing 100 procedures.