How Do SAGES Members Rate Its Guidelines?

Background: SAGES has been in the forefront of guideline development since the advent of laparoscopy. The development of practice guidelines should take into consideration the opinions of end users. The objective of this study was to obtain feedback by the SAGES membership on the guidelines developed by the SAGES guidelines committee.

Methods: An anonymous electronic survey (SurveyMonkey) was conducted via e-mail solicitation in the fall of 2011. Members were asked to submit their feedback on the 26 guidelines produced by SAGES on a 32-item questionnaire and to suggest topics for new guideline development and areas for improvement. Participants were asked to rate the quality, value, and ease of access of the guidelines on a 5-point Likert scale (1=poor, 5= excellent).

Results: 494 members responded to the survey; 474 (96%) were clinicians, 373 (75%) surgeons, and 324 (65%) had a leadership role in their institutions. Most respondents were males (83%) and had been practicing more that 10 years (54%). 383 (81%) had used SAGES guidelines and 96% agreed with their content. The quality of the guidelines was rated as 4.34, their value as 4.27, and the ease of access 3.97 our of 5. The most commonly used guideline was for the surgical treatment of GERD (67%) followed by the use of laparoscopy during pregnancy (51%). Most common reasons for guideline use was to update knowledge (68%), to maximize patient benefits by using evidence-based treatment (51%) and to obtain a critical review of the literature (51%). Several respondents made requests for new guideline development.

Conclusions: An overwhelming majority of SAGES members indicated that they greatly value and agree with the guidelines developed by SAGES. The results of this survey contributed to the improvement of the development and dissemination process for SAGES guidelines. Guideline developers should routinely pursue feedback from end users of guidelines. 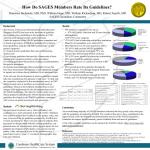