Hospital Acquired Conditions After Bariatric Surgery: We Can Predict, But Can We Prevent?

Introduction: Centers for Medicare and Medicaid Services (CMS) initiated a nonpayment policy for certain hospital acquired conditions (HACs) in 2008. As of 2013, 11 HACs have been identified. This study aimed to determine the rate of the three most common HACs (surgical site infection (SSI), urinary tract infection (UTI), and deep vein thrombosis (DVT)) among bariatric surgery patients. Additionally, the association of HACs with patient factors and the effect of HACs on post operative outcomes were investigated.

Methods and Procedures: Patients 18 years of age and older with a diagnosis of obesity and body mass index (BMI)≥35 who underwent bariatric surgery were identified using the American College of Surgeons’ National Surgical Quality Improvement Program (ACS-NSQIP) database (2005-2011). Patients were grouped into two categories for comparison: HAC versus no HAC patients and outcomes, including 30 day mortality and mean length of stay were compared. Procedure type, highest level of resident surgeon and multiple patient factors were closely investigated. Multivariate regression analysis was performed to identify risk factors for developing a HAC.

Results: 81,565 patients were identified, of whom 2,389 (2.9%) developed at least one of the three HACs. SSI was the most common HAC (1.8%), followed by UTI (0.7%) and VTE (0.4%). The rate of these HACs have significantly decreased over the years (from 5% in 2005 to 2.6% in 2011, p<0.001). Laparoscopic gastric banding was associated with the lowest rates of HAC (1.3%) and open gastric bypass with the highest (8.1%). HAC patients had significantly higher rates of in-hospital mortality (0.7% vs. 0.1%, p<0.001) and stayed in the hospital longer (3.9 vs. 2.1 days, p<0.001). Unadjusted analysis revealed that preoperative patient factors such as age, ASA, BMI, diabetes, dyspnea, history of COPD, hypertension, and steroid use were significantly associated with HACs. In particular, patients with BMI≥50 and those undergoing gastric bypass had significantly higher rate of HACs. Significantly more HACs were reported when residents (4-6 years post graduation) were present in the operating room compared to fellows or no residents being scrubbed (3.4% vs. 2.6% and 2.7% p<0.001). Multivariate analysis showed similar results (Table).

Conclusion: Our data demonstrate a strong correlation between the three most common HACs following bariatric surgery and factors intrinsic to the bariatric patient population itself. This calls into question the propriety of a payment policy which penalizes hospitals and surgical staff for inherent patient factors on which they can, by definition, have no impact. These findings are important to help inform health care policy decisions regarding access to care for bariatric surgery patients. 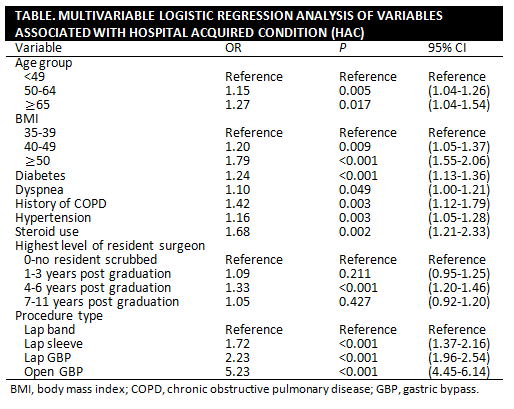