Introduction: Major technological advances have led to the development of less invasive techniques such as Laparo- Endoscopic Single-site Surgery and Transluminal Natural Orifice Endoscopic Surgery, being the former the most popular. However this approach requires special devices and instruments which are expensive and in some places non affordable, limiting their use and subsequently their benefits. We have develop an home-made single access surgical device (ARGO) that enables single-port laparoscopic procedures to be carried out at a third world country hospital.

Materials and Methods: A self-designed affordable device was made using equipment routinely available in an operating room such as a chest tube, surgical gloves and silk sutures. It is inserted to the peritoneal cavity through a 2 cm incision at the level of the umbilicus. Conventional trocars are placed through the fingertips and secured with rubber bands. Pneumorperitoneum sets de glove port firm in the abdominal wall.

Results: We performed 57 non-consecutive cases (January 2013-September 2013) of single port laparoscopic surgery using the homemade surgical device. The most frequently performed procedure was cholecystectomy (82.4%), followed by appendectomy (12.2%). An additional 5 m trocar was inserted in 7 cases due to technical difficulties. Mean operative time for cholecystectomies was 46 minutes. There were no conversions to open surgery. No postoperative complications were registered in this series.

Conclusion: Several single access laparoscopic procedures have been describe in current literature, however most of these have been develop using commercially available single port devices. Our homemade surgical device presents as a cost-effective tool with a safe profile to be used in single access laparoscopic surgery, specially in emergent countries. 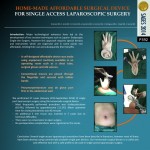