Methods: The bariatric Case Review Conference (CRC) was developed to establish a uniform and systematic approach to patients with one of the following characteristics: revisional surgery, failed clearance of pre-operative psychological assessment, medically high-risk, poor compliance, or any overt concern potentially predictive of poor outcome. Some of these patients were dismissed from the practice, while others went on to bariatric surgery. Those patients who went on to surgery are compared to patients who underwent surgery during the same time period who were not discussed. Retrospective chart review of the IU Health Bariatric and Medical Weight Loss database to evaluate the preoperative and postoperative variables of the two groups. Patients undergoing revisional surgery were excluded, as well as patients under 18 years old. P values <0.05 were considered statistically significant.

Results: Two-hundred fifty five patients were red-flagged and discussed, and 145 patients were found to be too risky to proceed. 110 were approved for surgery, but 30 did not undergo surgery, 21 were revisions, and 3 more were excluded d/t age, leaving 55 “CRC” patients for analysis, compared to 279 control patients. Baseline data (age, weight, BMI) were similar between the groups, with the exception of type of surgery (Table 1). Studied variables, such as preoperative weight loss (14.1 vs. 13.7 lbs), compliance with follow-up (75% vs. 72% at 6 months), and short/medium term weight loss, were the same. Length of stay differed between groups, but this difference was gone after analyzing by case-type (Table 2).

Discussion: Patients who were identified as “high-risk” for various psychosocial issues, who then went on to surgery, do not have inferior outcomes after bariatric surgery compared to patients who did not demonstrate these characteristics. Weight loss and even follow-up rates were similar in the two groups. The CRC screening process successfully excluded those patients who may have performed more poorly in the post-operative period. Notably, only the red-flagged patients who were compliant with preoperative requirements were allowed to proceed to surgery.

Conclusion: A rigorous multidisciplinary preoperative evaluation, with strict preoperative compliance requirements, selects for those patients who are able to succeed after bariatric surgery. 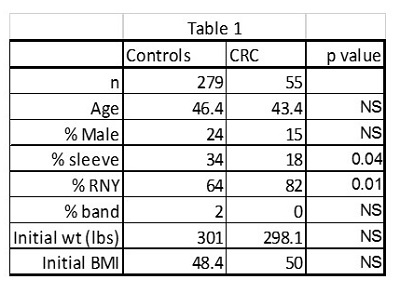 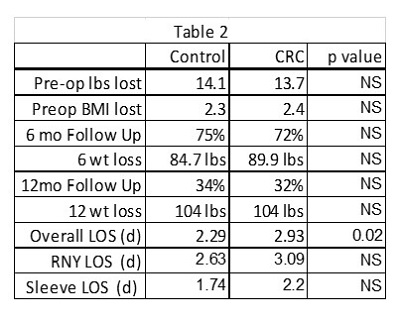