High Resolution Manometry Sub-Classification of Achalasia: Does it really matter?

BACKGROUND: Three variants of achalasia have been described using high resolution esophageal manometry (HRM). While manometrically distinct their clinical significance has yet to be established. Our objective was to compare the response to myotomy in patients with these achalasia subtypes.

METHODS: A retrospective chart review was performed to identify patients with achalasia who had HRM and who underwent laparoscopic Heller myotomy or Per Oral Endoscopic Myotomy (POEM). Symptoms and esophageal clearance by timed barium study were compared before and after treatment. Median values are reported except when indicated.

RESULTS:We identified 43 patients, 19 males and 24 female, with a median age of 50 years. The primary symptom in all patients was dysphagia, with a median duration of 4 years (range 4 months to 50 years). Based on HRM 27 patients (63%) were classified as Type I, 9 (21%) as Type II and 7 (16%) as Type III. Patient characteristics and outcome are compared in the table. Relief of dysphagia was similar for the three achalasia subtypes, and the Eckardt score was below 3 in all but one patient. Dysphagia was relieved in 85% of Type I, 100% of Type II and 86% of Type III achalasia patients. Dysphagia persisted in five patients, all of whom had a laparoscopic Heller myotomy. There was no significant difference in dysphagia relief between POEM and laparoscopic myotomy. On pre-treatment timed barium study, no patient had complete emptying at 1 and 5 minutes. After myotomy complete emptying occurred within 1 minute in 52% (16/31) and within 5 minutes in 58% (18/31) and was similar across groups.

CONCLUSION: Myotomy for achalasia results in excellent symptomatic outcome and improvement in esophageal clearance. There was no difference among the described HRM achalasia variants. This calls into question the clinical relevance of achalasia sub-classification and affirms the benefit of myotomy for this disease. 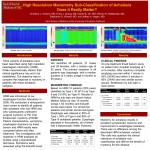