During partial hepatectomy, most commonly performed for the treatment of liver tumors, blood loss is a significant patient risk, as the liver is a highly vascular organ with blood flow rates on the order of 1500 ml/min., which is approximately 25% of total cardiac output. Excessive liver bed bleeding can also obscure the operative field, making it difficult to identify major vasculature as the surgeon progresses through the liver parenchyma. Finally, during thermal ablation procedures, it is often desirable to reduce hepatic blood flow to reduce the “heat sink effect” associated with blood convection.

One approach for dealing with these challenges involves a surgical technique commonly referred to as the “Pringle maneuver,” in which a hemostat or tourniquet is clamped or tied around the hepatoduodenal ligament, interrupting the blood supply to the liver through the hepatic artery and portal vein. Although this approach reduces blood loss and improves visualization at the resection site, the technique is associated with significant clinical risks, including ischemic damage to hepatocytes, esophageal varix rupture, or splenic rupture, particularly in patients suffering from chronic liver disease or portal hypertension. To address these risks, many surgeons have advocated for intermittent occlusion intervals and maximum occlusion periods. 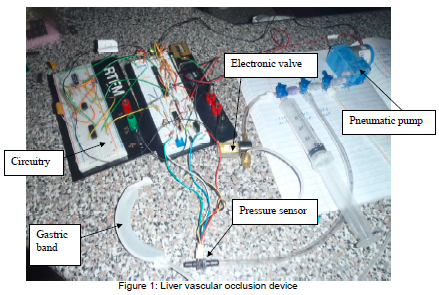 The basic operation of the prototype is relatively simple. The gastric band is intended to serve as the occlusion device, inflated by the pneumatic pump. The pressure inside of the gastric band, which serves as a proxy for the degree of vascular restriction provided by the device, is monitored by the pressure sensor. According to the programmed timing sequence, the logic circuit regulates the pressure of the gastric band (between 2-3 psi, although this is fully adjustable), continually operating the pump and valve to maintain this pressure set point. This set point is maintained for about 85 seconds, at which point the valve is opened continuously for about 45 seconds, evacuating the gastric band and providing the intermittent occlusion recommended in the literature.