Has the Surgical Robot Had an Impact on the Management of Benign and Malignant Diseases of the Thorax?

Objective of the technology or device:

Advances in surgical robotics provide surgeons with a minimally invasive surgical platform that has superior visualization, dexterity, and control as compared to traditional laparoscopic methods. In thoracic surgery, its use is particularly advantageous during dissections of the mediastinum and pulmonary hilum, and dissection and isolation of the delicate pulmonary vasculature. These dissections can be prohibitively difficult for the average thoracic surgeon when using rigid thoracoscopic instruments and ports, which might explain why over a decade after the introduction and general availability of video-assisted thoracoscopic surgery (VATS) technology, 70% of all lobectomies performed in the United States are still completed by open thoracotomy.

Description of the technology and method of its use or application:

Outcome data for all 68 robot-assisted procedures, including morbidity and mortality data, rate of conversion to open procedure, operative time, and postoperative length of stay was collected. These cases were compared to a cohort of thoracic procedures performed prior to this technology being available at our institution. During the time period of March 2010 to August 2011, 29 lobectomies were performed: 24 of these were open thoracotomies and 5 were VATS lobectomies. Once the robot was available for our use, all 25 patients who required a lobectomy were performed using the robot. Of the 25 robot-assisted lobectomies, there were no deaths (0%), 3/25 major postoperative complications (12%), and 3/25 conversions to open thoracotomy (12%). Postoperative length of stay averaged 4.8 days. Of the open thoracotomies, 8/24 began as VATS explorations that were converted to open thoracotomies either upon seeing a centrally located tumor or fused fissures, or once frozen sectional biopsy confirmed that a completion lobectomy would be required. There was one death (4.2%) and 7/24 major postoperative complications (29.2%). Postoperative length of stay averaged 9.0 days. Including the 5 VATS cases, the average length of stay for our 29 pre-robot lobectomies was 8.0 days, compared to 4.8 days for our robotic lobectomy patients.

Robotic surgery holds a unique advantage in the field of thoracic surgery. Despite its availability and reported efficacy and feasibility, VATS has not been as widely adopted by thoracic surgeons as laparoscopy has been by general and colorectal surgeons. This has changed with the introduction of the robot and has allowed our practice to evolve from one of mostly open lobectomies to one of minimally invasive robotic lobectomies. This change in practice has decreased the length of stay after lobectomy and our postoperative complication rate. Superior visualization of the anatomy and extensive freedom of motion is a result of robotic surgery and is a uniquely appealing minimally invasive alternative to VATS in thoracic surgery. 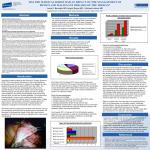