Has the Surgical Care Improvement Project (scip) Antibiotic Protocol Delivered on Its Promise?

Introduction:
The SCIP protocol was instituted primarily by the centers for medicaid and medicare. One key goal was to have the antibiotics administered in a timely fashion to help decrease post operative infections. A second goal was to discontinue antibiotics in a timely fashion. These guidelines, including appropriate antibiotic selection have become a cornerstone in surgeon and hospital quality measures. While the goals at the onset of the SCIP Antibiotic protocol were admirable and well meant, they now threaten to serve as quality measures should they be inadvertently missed. Post surgical infections, such as urinary tract infections, are deemed “never” events by certain insurance carriers who then refuse payment. Often post surgical infections are beyond the auspices of the surgeon, yet it is the surgeon that harbors a tremendous risk should one develop. The goal of this study was to investigate if the SCIP antibiotic protocol has truly reduced the rate of post surgical infection. Should there exist a true standard of care that has eradicated or greatly marginalized post surgical infection, it should be absolutely instituted, however if the SCIP guidelines have not shown to erradicate infection completely, than the surgeon should not incur any penalty if such a protocol was not adhered too.

Methods and Procedures:
From 2007-2011, all colon surgery and select rectal surgery was evaluated. Open cases, laparoscopic cases, trans-anal mass resection, Trans-anal Endoscopic Video Assisted (TEVA) rectal resection, Trans-anal Endoscopic Laparoscopic Assisted Resection (TELAR) were included in our study. Anorectal cases (hemorrhoids, fissures, advancement flaps) were excluded from our study. The antibiotics used were identified. The time of administration for the respective antibiotics was documented. The stop time and duration of the antibiotics was also evaluated. Each patient was followed for 14 subsequent days to determine the presence or absence of a post surgical infection.

Results:
632 cases were evaluated in the study. Ertapenem was the antibiotic used in 87% (552) of the time. Other antibiotics used were cefoxitin (7.9%), cefotetan (3.2%) and a combination of levofloxacin and metronidazole (1.6%). The overwhelming majority of the antibiotics (98.7%) were given in the pre-operative area, within one hour of the operation start time. The remainder of the antibiotics were administered outside of the one hour pre-operative window. Most of the antibiotics were stopped within a 24 hour period. 40 (6/3%) of the patients developed wound infections. Interestingly all 40 were obese with a body mass index (BMI) greater than 30. 38 (6%) of the patients had underlying diabetes with a varied HbA1c level (from 6.8 – 8.0).

Conclusions:
The SCIP guidelines serve as useful parameters in addressing antibiotic dosing. Prior data showed erratic use of antibiotics with a significant variation in stop times and dosage. Antibiotic selection was also not uniform. However, post-operative wound infections will continue to occur in surgery, even with strict diligence to sterile processes. It is not always, or even often, the fault of the surgeon when such an infection occurs, and therefore a careful review must be undertaken before the surgeon is penalized. 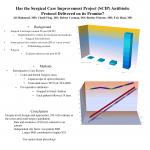