INTRODUCTION: There are about 550-650 operating room fires occurring each year which have devastating effects on patients. SAGES FUSE curriculum provides didactic knowledge on OR fire prevention but there is no hands-on component training in identifying fire risk and its management. The objective of this study is to compare the effectiveness of the Virtual Electrosurgical Skill Trainer (VESTTM) OR fire hands on training module in addition to FUSE didactics.

METHODS AND PROCEDURES: The study was a mixed design with two groups, control and simulation. After a pre-test questionnaire that assessed the baseline knowledge of both groups, they were given didactic material that consists of a 10 min presentation in power point format and reading materials from chapter 3 of the SAGES FUSE manual. Additionally, the simulation group practiced on the OR fire module of the VESTTM for hands-on experience for one session that consisted of five trials within a week from the pre-test. One week from the presentation, performance of both groups was again assessed using a post-questionnaire. Both groups then participated in a mock OR fire scenario, simulated in a mock OR room within one week from the post-test. Subjects were asked to identify the components of fire triangle that are present in the mock OR room and put out a simulated fire. The subjects were videotaped and their performances were assessed using a checklist by two independent raters.

RESULTS: A total of 10 subjects (n=10, 5 per group) participated in this IRB approved study. Mean test scores for both groups combined increased from 5.1 to 7.5 (Wilcoxon signed Rank Test, p = 0.01). Mann Whitney U test showed no difference between the two groups in their pre-test (p=0.69) and post-test (p=0.15) scores. Mann-Whitney U test on the checklist scores showed significant difference between the two groups in correctly identifying the Oxidizer source (p=0.015) and correct sequence of action in putting out the fire (p=0.002). Spearman’s rho test showed significant agreement between the two raters (r= 0.773, p < 0.001).

CONCLUSIONS: Subjects who had hands-on training on the VESTTM OR fire module were able to put out the simulated fire using proper sequence of steps compared to the control group, who missed critical steps such has stopping the flow of gases or completely removing the drapes of the patient. Interactive hands on simulation was found to be critical for teaching OR fire prevention and management. 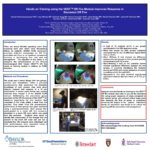