Introduction: Most advanced laparoscopic procedures nowadays require the surgeon to operate with both hands with a high level of performance. Particularly, common laparoscopic procedures, such as Nissen fundoplication, demand a thorough and precise work with surgeon’s non-dominant hand. The purpose of this study was to investigate the level of muscle exertion, errors and performance of dominant and non-dominant hands from subjects with different laparoscopic experience. Our hypothesis was that hand dominance did matter while performing a novel laparoscopic task.

Methods and Procedures: Six healthy participants (3 medical fellows, all right-hand dominant) were recruited to perform a novel laparoscopic training task. They were asked to pass a ring (8 mm in diameter) from one end of a 4-coiled model to another end, and return it back to starting point using only one standard laparoscopic instrument in a standard FLS trainer box. The electromyography (EMG) data of two-sided anterior deltoid, biceps and triceps brachialis, flexor carpi radialis, and extensor digitorium were collected using the Delsys Trigno™ Wireless System (Delsys, Inc., Boston, MA). The raw EMG signals were sampled at 4000 Hz using the EMGWorks Acquisition software (Delsys, Inc., Boston, MA). Data were processed with band-pass filter of 20-300 Hz and smoothed by root mean square (RMS) algorithm with 150 ms moving window to compute the EMGRMS data. Each EMGRMS data were normalized by individual maximal voluntary contraction (MVC) and were presented as the percentage of MVC (%MVC). Time needed to perform the task and the numbers of errors (e.g. dropped ring) were recorded. Two-way ANOVA (hand dominance and task direction as within-subject factors) with repeated measures was applied to examine the two-factor effect on %MVC. The post-hoc comparison with Bonferrori correction was applied when significant main effect was found (α=0.05). Separate independent t-tests were applied to examine the differences on time and the number of errors. 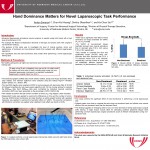