Hand-Assisted Laparoscopic Surgery in Elderly: Is Age an Issue?

Introduction: Hand-assisted laparoscopic surgery (HALS) is another minimally invasive option for complex colorectal procedures. The feasibility and safety of HALS in the elderly population have not been evaluated. Therefore, the aim of this study was to evaluate the outcomes of HALS in these patients.

Methods: This was a retrospective analysis of a prospectively managed IRB-approved database. Patients who were scheduled for HALS colorectal resections between September 2006 and August 2012 were included. Data extracted included demographics, medical and surgical comorbidities, operative variables, and postoperative outcomes including length of hospital stay, and 30-day morbidity and mortality. Outcomes were compared between patients in two age groups: 65-79 years (group A) and ≥ 80 years (group B). Statistical analysis was performed using SPSS v 15.0; a p value <0.05 was considered statistically significant.

Results: Ninety-six of 97 patients (99%) had their procedure completed by HALS. There were 75 patients in group A and 21 patients in group B. The indications for resections were diverticular disease (41.7%), malignancy (37.5%), inflammatory bowel disease (13.5%), polyps (4.2%), and others causes (3.1%). The most common procedures were sigmoidectomy (47%), anterior resection (27%), total proctocolectomy and subtotal colectomy (8.3% each). All of the patients included had ASA classifications of 2 or 3, with a significant percentage in group B classified as ASA 3 (p <0.05). There were no significant differences between the two groups in other confounding factors such as previous abdominal surgery, neoadjuvant chemoradiation, steroids, and antiplatelet or anticoagulant use. The mean operative time was 192.8 (range: 76 to 371) minutes, and estimated blood loss was 146.6 (range 50-750) ml, with no significant differences between the groups. The mean hospital stay was 7.24 days (group A-6.9, group B-8.5) (p>0.05).

The most common postoperative complication was surgical site infection (12.5%) followed by prolonged ileus (9.4%) and cardiac events (4.2%). Ninety-two percent of patients had bowel anastomosis with a 3.4% leak rate (n=3, group A-3, group B-0). Two of the patients needed CT-guided drainage, and another patient needed a laparoscopic diverting loop ileostomy and abdominal washout. A diverting ileostomy was made in 22 patients (23%); high-output stoma-related complications were noted complicating the postoperative period in 18% of patients (n=4). Paradoxically, the 30-day readmission rate was 13.3% in group A (n=10) and 0% in group B (p>0.05); there was no 30-day mortality in either group.

The outcome analysis did not show any significant differences in the variables evaluated between the two groups.

Conclusions: Colorectal HALS resection is a viable option for the elderly including octogenarians. 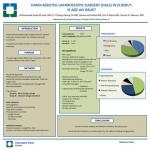