Objective: Laparoscopic splenectomy (LS) has several advantages compared to the open technique. Splenomegaly poses several technical hurdles for the performance of splenectomy laparoscopically. With the introduction of hand-assisted laparoscopic splenectomy (HALS), the application of laparoscopic splenectomy has broadened to include cases of massive splenomegaly. We hypothesize patients who undergo HALS may enjoy the benefits of laparoscopic surgery while having their enlarged spleens safely removed. Methods: A retrospective review of patients who underwent HALS or LS at a tertiary care center between January 2003 and June 2008. The main outcomes evaluated were the intra- and early postoperative morbidity and mortality rates, conversion rate to open, need for blood transfusion and length of postoperative hospital stay. Patients’ demographics, diagnosis leading to splenectomy, splenic weight and postoperative days to resuming full diet were also measured. Differences between HALS and LS groups were analyzed and compared. Differences between groups were also evaluated controlling for splenic weight and malignant diagnosis using multiple linear and logistic regression analysis. Results: 103 patients underwent splenectomy during the study period (23 HALS and 80 LS). The HALS group had significantly larger spleens (mean weight 2165 vs. 209 g, p 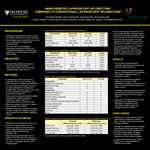