Although laparoscopic colon surgery has been described since the early 1990s its acceptance has been slower than that of other minimally invasive procedures. This is related to the steeper learning curve and the large number of cases needed to attain and maintain skills with the procedure. The introduction of hand assisted laparoscopic surgery (HALS) has been reported to maintain the advantages of minimally invasive surgery (MIS) while reducing the operative time and the conversion rate to an open procedure. At the same time it is associated with a less steep learning curve allowing for a wider application of MIS in colon surgery. In this study we report the experience of a single surgeon at a single institution with HALS.

We retrospectively reviewed and analyzed the data prospectively entered and electronically maintained of a single surgeon’s experience at a single institution over a five year period beginning from September 2004 and ending in September 2009. The demographics, indications, type of procedure, operative time, conversion rate, and the length of hospital stay have been documented. The early study period arbitrarily defined as the first 2.5 years, was compared with the later experience defined as the last 2.5 years.

324 cases have been performed during the study’s time period. The most common indications were diverticulitis and malignant disease. The average operative time was 194 minutes, conversion rate to an open procedure was 1.8%, and overall hospital stay was 3.2 days. 154 cases were performed during the early and 170 cases during the late study period. The two groups were similar with regards to age, sex, indications, and type of procedures performed. The increase in operative experience was associated with a significant decrease in operative time, hospital stay, and conversion to open surgery. The introduction of a fast track protocol in 2007, with administration of clear liquids and bowel stimulating agents the night of the procedure and advancement of diet thereafter with return of bowel function has resulted in a significant decrease in hospital stay from 3.3 to 2.6 days.

The current study is the largest series of a single surgeon’s experience with hand assisted laparoscopic colon surgery. HALS allows for expansion of indications and wider application of minimally invasive techniques in colon surgery. Increased experience is associated with a reduction in operative time and conversion rate. Protocol based early diet resumption is associated with a significant decrease in hospital stay and a resultant reduction in costs. 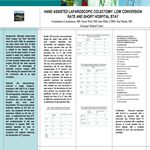