[INTRODUCTION] It is seriously important for living donations to make safer and to reduce operating stress. Laparoscopic surgery is though to be a useful operating procedure for solving these problems. We performed first case of living donor (LD) simultaneous pancreas and kidney transplantation (SPKTx) in Japan in 2004, and until now, we have done 10 cases of LD-SPKTx. With donor operation, open approach had been performed for first 8 cases. However, in the last two cases, we started hand-assisted laparoscopic (HALS) living donor nephrectomy and distal pancreatectomy for donor benefits. In this presentation, we report successfully completed HALS living donor nephrectomy and distal pancreatectomy.
[METHOD AND PROCEDURES] In SPKTx donor operation with HALS approach, the patient was placed in the supine position rotated 30 degrees to the right. Placements of working ports were as follows (one hand port (7cm); above umbilicus, three 12mm ports; (left lateral abdomen, left subcostal abdomen and left lower abdomen)). First, we performed left nephrectomy after dividing ureter with double clipping and finally dividing renal artery and vein by ENDO GIA (Covidien). Next, we performed distal pancreatectomy. Resection position was above the left side edge of portal vein.
[RESULTS] Donors were a 58-year old woman and a 28-year old man. Their height, weight and body mass index were as follows (160cm and 165cm, 55kg and 65kg, 21.6% and 23.8%). Total operation time was 468}28 minutes. An estimated blood loss was 201}223 ml. A warm ischemia time of kidney was 149}40 seconds and that of pancreas was 300}85 seconds. As compared with open approach, HALS approach took more operation time and almost same ischemic time, but less blood loss. Graft functions in recipients were so good that urine from transplant kidney and normalizing of blood sugar were recognized immediately after transplantation. They discharged the hospital without remarkable complications.
[CONCLUSIONS] We demonstrated that HALS nephrectomy and distal pancreatectomy would have advantages of safeness for donor and of transplant organ function in SPKTx. 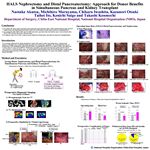