Introduction: Although the number of female surgeons and surgery residents has increased over time, women remain under-represented in surgery and academic surgery leadership positions (24%).  Surgical research and publications are used as a determinant of hiring and promotion.  We hypothesize that among bariatric surgery research, female surgeons are highly under-represented.

Results: Of the bariatric surgery publications reviewed, only 5% of first authors and 7.5% of last authors were female surgeons.  Even though the proportion of female authors has increased over time, this is not proportional to the increase in the number of female surgeons or surgery residents (Figure 1). 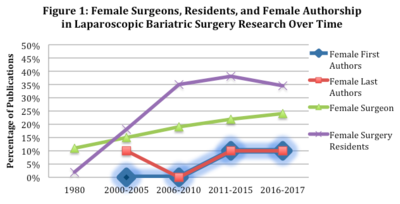