Introduction: Cholecystectomy is a commonly performed surgical procedure in the United States, with the most common indications including symptomatic cholelithiasis and cholecystitis. Previous data have suggested that male patients undergoing cholecystectomy have longer operative times and higher complication rates, although the reason for the phenomenon is unknown.

Methods: We performed a large single-center retrospective analysis of all gallbladder specimens sent for analysis to the department of Pathology between 2009-2014. Exclusion criteria included preoperative suspicion for malignancy or polyp, and non-biliary indications for gallbladder resection (such as trauma). The pathological results were tabulated, including both common and rare findings. The results were then stratified to determine differences between gender, and chi squared analysis was performed to determine statistical significance between groups.

Conclusions: Male gallbladder specimens were significantly more likely to have several histopathological markers of severe and acute inflammation, such as gangrene, ulceration, and serositis. In contrast, females more commonly had noted cholesterolosis of the gallbladder and were more likely to have chronic and “mild” cholecystitis as noted by the interpreting pathologist. The more advanced disease noted on male gallbladder specimens may account for higher levels of complications seen with male patients who undergo cholecystectomy, however further study is needed to better elucidate these findings. 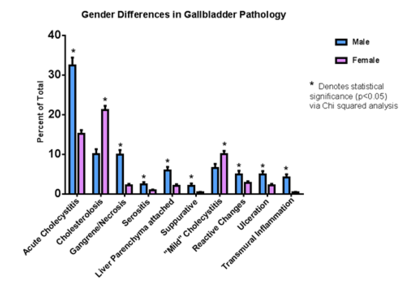