Introduction: Laparoscopic sleeve gastrectomy (LSG) is the most commonly performed bariatric procedure in the United States today. Although LSG has been proven to be safe and effective, it is not without complication. Stricture or stenosis can be a serious, yet rare, complication post LSG. The standard treatment is endoscopic dilation or a conversion to Roux-en-Y gastric bypass if less invasive treatment is ineffective. Gastroparesis following LSG is even more infrequent than stricture with only case reports in the literature. Given its rarity, optimal management remains unclear.

Case Report: 48 year old male presented to our bariatric center of excellence for an elective LSG. The patient had a BMI of 41 and a past medical history of obstructive sleep apnea, hyperlipidemia and diabetes mellitus. LSG was carried out without complications around a 32 french calibration tube in the usual manner. A single stitch was placed opposite the incisura to prevent torsion. On postoperative day (POD) #1 an esophagram was performed with delayed emptying initially, and eventual passage of contrast into the duodenum on POD#2. Despite this, the patient was unable to tolerate PO clears with persistent nausea and vomiting. On POD#6 esophagogastroduodenoscopy was performed revealing mild gastritis with the scope being passed into the duodenum with ease. No stricture or torsion was found. The patient, however, continued to have nausea and vomiting with inability to tolerate clear liquids. On POD #13 a Roux-en-Y gastric bypass (RNYGB) was offered to the patient with gastroparesis following LSG being the principal cause of symptoms. Intraoperatively, a 40F calibration tube was easily passed into the duodenum again without any stricture or torsion noted. A RNYGB was then performed in the usual manner. Postoperatively, an esophagram was obtained on POD #1 which showed brisk passage of contrast through the gastrojejunostomy. The patient was then started on a clear liquid diet, which he tolerated. The patient was discharged home tolerating clear liquid diet and on follow up visits has not had any more complaints.

Discussion: PO intolerance following LSG without any anatomic findings can be difficult to diagnose and treat. Multiple studies have shown that there is no statistically significant correlation in gastric emptying time when comparing LSG patients to non bariatric patients. We propose that in the case of gastroparesis following LSG, a conversion to a RNYGB is an effective surgical treatment option. 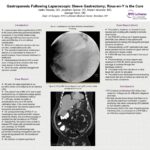