Introduction: Pancreatectomy is considered to be a last resort in treating pain due to chronic pancreatitis. A laparoscopic version of this procedure is becoming more and more common. This case report describes the serious complication of gastric volvulus with necrosis, which has not to our knowledge been described before.

Patient and Methods: A 20-year-old female was admitted to the ER with a history of abdominal pain and vomiting but a 12 hour history of being unable to vomit despite retching. Five months previously she had undergone a laparoscopic total pancreatectomy due to chronic pancreatitis at another institution. Abdominal X-ray showed a massively distended stomach. An attempt to place a nasogastric tube with the help of radiography failed and suspicion of a gastric volvulus arose.

Results: Emergency laparotomy revealed gastric volvulus with necrosis of the stomach. Total gastrectomy was performed with a Roux-en-Y esophagojejunostomy. The patient has since experienced difficulty with nausea and pain.

Conclusion: Gastric volvulus should be considered as a differential diagnosis in patients who have undergone laparoscopic total pancreatectomy. Borchardt’s triad can be helpful in recognizing volvulus: severe epigastric pain, retching without vomiting and an inability to place a nasogastric tube. 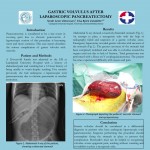