Gastric/duodenal bacterial colonisation in a Swedish population – is there a need for changes in antibiotic prophylaxis?

Introduction: Bacterial contamination is a concern during transgastric endoscopic ultrasound interventions and NOTES procedures. The human gastric bacterial flora has not been well characterised during modern times, taking the use of PPI into account. The aim of this study was to investigate the gastric and duodenal bacterial flora in patients with or without PPI treatment.

Methods: Patients referred for routine gastroscopy, without ongoing or recent antibiotic treatment, were included. Use of PPI’s was recorded. Sampling for gastric bacterial culture was performed in the antrum of the stomach using a routine ERCP-cytology-brush. Duodenal sampling was performed in the second half of the study. For duodenal sampling a new brush was used in the bulb. Positive cultures were analysed for types and subtypes.

Results: 103 patients were included, 58 were on PPI medication. A total of 54 patients had positive gastric bacterial cultures, 41 of them were on PPI medication. Positive cultures were significantly more common among patients with PPI’s (41/53) than among those without PPI’s (13/50) (p< 0.0001). Overall median age was 53 years (20-89). Median age was significantly higher among PPI-users (62 years vs 45 years p=0.023). Median age was also significantly higher among patients with positive culture (63 vs 42 p=0.001). Endoscopic findings: 50/103 patients had normal findings at gastroscopy, 17 had gastritis/gastric ulcer, 13 had esophagitis, 12 had duodenitis/duodenal ulcers and 11 had other findings. Bacterial growth was found in about 50% in each of these groups.

The dominating bacterial types were Streptococci of oral subtypes. Hemophilus influenzae and lactobacillus also occurred, indicating an oral and upper airway origin. Three patients had candidiasis. In 20 patients one bacterial species was found, 19 had two species, 8 had three, 8 had four and 5 had > 4 species.

Duodenal bacterial growth was seen in 29/52 patients, 25/52 had PPI medication. Significantly more positive cultures were found among PPI users, 22/25, than among those without 7/27 (p< 0.0001). 22/52 had positive cultures at both locations with similar bacterial types in 17.

Conclusion: The gastric bacterial flora seems to be of mainly oral origin. Similar colonisation pattern was found in the duodenum. The incidence of positive bacterial culture strongly correlated with PPI use and seemed to increase with higher age. Patients with peptic ulcer perforations or undergoing upper GI-tract interventions should receive antibiotics covering the oral bacterial flora. 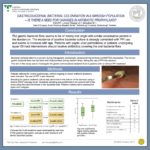