Gallstones and Reflux Disease – more frequently associated than we thought?

Background: There have been surprisingly few studies assessing the relationship between gastroesophageal reflux and biliary disease, considering they overlap presenting symptoms and risk factors, particularly obesity. Published results to date have been conflicting. The goal of our study is to document the association of biliary disease in our reflux patient population and review the literature to discuss whether this should influence the pre-operative workup algorithm for patients being evaluated for anti-reflux surgery to include routine evaluation of cholelithiasis.

Methods: We performed a retrospective review of 30 patients that underwent laparoscopic fundoplications for reflux disease from June 2015 to August 2016. Surgery performed was either a Toupet or Nissen fundoplication (LF), and all were performed laparoscopically by a single surgeon. The need for concurrent cholecystecomy or previous cholecystectomy, history of Barrett’s esophagus, history of PPI use, and demographic data were evaluated. All patients had imaging to evaluate for biliary disease.

Conclusions: The prevalence of gallbladder disease in our severe reflux population (62%) is much higher compared to that found in the general population, generally cited as 10-20% of Americans. Our patients with gallbladder disease also tended to be in patients with BE, and therefore more chronic and severe gastroesophageal reflux. There is overlap in symptomatology between the two disease processes and a question remains if there is a relationship in their development. Possible explanations are described in the literature that links gallbladder dysmotility to both BE and PPI use. When evaluating a patient for surgical management of gastroesophageal reflux disease, attention should also be paid to questions regarding gallbladder symptoms. It may be also beneficial to include gallbladder ultrasound to the pre-operative workup for reflux so concomitant cholecystectomy can be performed.

This is data from patients undergoing surgery in the last 13 months with charts readily available in our office. We have 5-7 years of additional charts that we will review in order to improve the generalizability of our study. 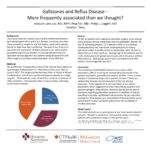