INTRODUCTION The purpose of this study was to closely examine the usefulness of the two-tape traction method for traction of the upper esophagus during lymph node dissection (LND) in esophageal cancer patients undergoing thoracoscopic esophagectomy, since LND, especially for the upper mediastinal nodes, was difficult.

PATIENTS AND METHODS We retrospectively reviewed the database of 274 patients with thoracic esophageal cancer who underwent thoracoscopic esophagectomy in the prone position between September 2009 and August 2016. Chronologically, three methods were adopted for traction of the upper esophagus, as follows: Method A (no traction) during the first term; Method B (traction with a single thread) during the second term; Method C (traction with two tapes) during the third term. The number of dissected lymph nodes, the intraoperative factors, and the incidence of adverse events were compared among the three methods using one-way ANOVA, Tukey’s test, Games-Howell’s test or chi-square test.

CONCLUSIONS These results suggested that the two-tape traction method during mediastinal LND was useful as it allowed a stabler and wider operating space to be created, enabling a larger number of lymph nodes to be dissected with no increase in the incidence of thoracoscopy-related adverse events. 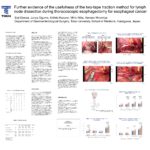