Ingestion of foreign bodies is a common yet under reported ailment cheifly in the pediatric and impaired adults population. Provided the swallowed material has traversed the esophagus, treatment is generally managed conservatively with serial radiography to ensure progression of the object. Failure of the object to progress past the stomach results in evaluation and retrieval by endoscopic mean. Objects that result in peritonitis, perforation, sepsis, or obstruction, require surgical intervention whether by laparoscopy or laparotomy. In this case, the patient presents after swallowing three AA batteries in an attempted suicide. After an initial trial of conservative management, the batteries failed to progress through the gastrointestinal tract leading to a small bowel obstruction. A laparoscopic approach with the aid of fluoroscopy was used the extract the three foriegn bodies, by making a small enterotomy in the jejenum and milking the batteries proximally similar to gallstone extraction for gallstone ileus. Foreign bodies progressing to the small bowel causing obstruction can be approached laparoscopically in the right conditions and may offer a safe alternative to laparotomy. 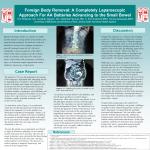