Fluorescence Imaging of Indocyanine Green During Laparoscopic an atomical Hepatectomy.

Introduction: Mapping of the liver segment is extremely useful for anatomical liver resection. Conventional hepatic segment identification requires the puncture of segmental portal branch under the intraoperative ultrasonography and stain by blue dye injection. This technique is easy for open surgery, however, difficult in laparoscopic surgery. Recently, visualization of the hepatic segment by using indocyanine green (ICG) and fluorescence-image laparoscope was reported. Therefore, we introduced this new technique for laparoscopic anatomical hepatectomy.

Results: In patient 2, segment 7 was detected as bright area by injecting ICG to the S7 portal branch. The resectional line of the parenchyma could also be confirmed and intraoperative visualization of the segmental line was possible. In both cases, we could visualize the sectional image of bile ducts on the cutting surface and there were no bile duct leakage to ligate. No postoperative bile leaks were occurred. In Case 1, we could not puncture the segmental branch because of her obesity. There were no complications related to the ICG injection.

Conclusions: For the pure laparoscopic hepatectomy, fluorescence imaging of ICG is considered to be useful technique as visualization of resectional segment and bile leak test after the hepatectomy. 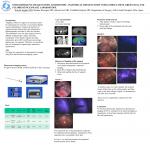