INTRODUCTION: It has been well documented that surgeons suffer significant ergonomic stress when performing laparoscopic procedures. Robotic surgery holds the promise for ergonomic improvements to the field of minimally invasive surgery. This advantage can potentially be quantified using surface EMG. In this pilot study, we describe a method for identifying ergonomic differences between laparoscopic and robotic surgical platforms in a dry-lab setting using validated Fundamentals of Laparoscopic Surgery (FLS) tasks. We hypothesize that performing FLS tasks on laparoscopic and robotic surgical platforms will produce statistically significant differences in mean muscle activation, as quantified by surface EMG.

METHODS: Six subjects with varying levels of surgical experience performed FLS peg transfer (PT), pattern cutting (PC), and intracorporeal suturing (IS) tasks on laparoscopic and robotic platforms. Surface EMG measurements were obtained from each subject’s bilateral bicep, tricep, deltoid, and trapezius muscles. EMG measurements were normalized to the maximum voluntary contraction (MVC) of each muscle group. Average normalized muscle activation (%MVC) was calculated for each muscle group on both surgical platforms for each FLS task. We compared mean %MVC values with paired t-tests and considered differences with a p-value less than 0.05 to be statistically significant. 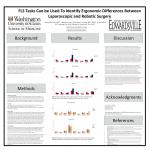