Five cases of laparoscopic surgery for mucocele of the appendix

Mucocele of the appendix is an uncommon condition where luminal distention by mucin, usually results from either benign (hyperplasia or mucinous cystadenoma) or malignant (mucinous cystadenocarcinoma) epithelial proliferation. Standard therapy is surgical resection because of the difficulty in determining malignant or benign, and the risk of rupture that may cause pseudomyxoma peritonei whether the lesions are benign or malignant. We usually chose appendectomy or partial cecectomy for mucocele of the appendix, but if it is considered malignancy we chose ileocecal resection with dissection of the lymph nodes. Five patients underwent laparoscopic surgery for mucocele of the appendix between January 2013 and June 2016 at our single insutitution. It consists 1 women and 4 men with a mean age of 62.4 years (range, 49-77 years). One patient experienced pain of right lower abdomen, other four patients had no symptoms and tumor was detected incidentally. The mean maximum diameter of tumor by CT was 61.8mm (range, 27-95 mm). Surgical procedures performed were appendectomy in one case, partial cecectomy in three cases and ileocecal resection in one case. In the case of ileocecal resection, CEA level was elevated at 12.1 ng/mL. The mean operative time was 134 minutes (range, 83-232 minutes). Perioperative mortality and morbidity were 0% and 20% respectively. One case needed laparoscopic adhesiotomy because of adhesive intestinal obstruction. The mean post operative hospital stay was 13 days (range, 4-45 days). Pathology revealed low-grade appendiceal mucinous neoplasm in all cases. There are no re-admission or tumor recurrence, such as pseudomyxoma peritonei. Recently many cases have reported successful laparoscopic surgery for mucocele of the appendix, although laparoscopic surgery is still controversial, as inadvertent rupture of the cyst due to improper handling will cause pseudomyxoma peritonei. In our five cases, all patients underwent laparoscopic surgery safety, but we selected open surgery in cases of the tumor was very large or it was suspicious of infiltration of other organs. We should select proper surgical technique according to each disease condition. 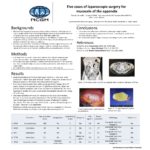