INTRODUCTION: Although the laparoscopic approach has been well accepted for symptomatic cholecystolithiasis, the introduction of NOTES has put the minimal invasive character of laparoscopic surgery to a new perspective. Transumbilical single port surgery could be a safe and scarless way to improve laparoscopic surgery without the pitfalls and challenges that NOTES still hold today. The authors report the first experiences with a single port device in combination with flexible angulated and fixed curved instruments for elective cholecystectomies in The Netherlands.

METHODS AND PROCEDURES: Transumbilical single port cholecystectomies were performed in 23 patients with symptomatic cholecystolithiasis or episodes of cholecystitis. The umbilicus was used as single access point for a single port device (Triport or Triport+, Olympus Hamburg Germany) and a combination of angulated (Autonomytm Laparo-Angletm, CambridgeEndo Framingham, MA, USA), fixed curved instruments (HiQ LS line, Olympus, Hamburg Germany) and conventional laparoscopic instruments. For adequate triangulation a transabdominal suture was used in most cases for traction on the gallbladder.

RESULTS: Data was prospectively collected. No major intra- or post-operative complications occurred. 8 inadvertent gallbladder perforations were noted, without clinical consequences. Mean operating time was 78 minutes (range: 47 -135), and Pearson’s coefficient showed a significant negative correlation of -0.491 (P = 0.033) between the decrease in operating times and growing experience. Two pregnant patients were safely operated at 15 and 16 weeks of gestation respectively, and remained intact and uneventful at time of follow-up. Mean admission time of surgical admission (excluding 3 days of gynaecologic admission) was 1.1 days (range: <12 hours to 6 days), with 83% of patients admitted for 24 hours or less. At inspection of the umbilical site, 2/23 patients had an wound infection at the umbilical incision site, both resolved completely with conservative treatment. One patient had a skin defect at the umbilical site without signs of infection. In the remaining 20/23 patients, the umbilical site was healed completely.

CONCLUSIONS: We successfully and safely performed the first series of single port cholecystectomies with flexible angulated and fixed curved instruments with aid of a single port device. Transumbilical single port surgery seem a safe and applicable step toward “scarless” surgery without the risks associated with NOTES. In the first 3 patients of our series, we placed an additional transabdominal trocart for traction and triangulation of the galbladder, which was later replaced by transabdominal sutures. The Triport+ (Olympus, Hamburg Germany), which is provided with an additional working channel, prevented the need for a transcutane stitch, that was used during the earlier patients with the aid of the Triport. The fixed curved instruments effectively prevented cross-over of and clashing of instruments that frequently occurred with the flexible, angulated and conventional instruments. Randomized and substantial trials are required to validate the advantages that single port cholecystectomy holds over the conventional laparoscopic approach in order to implement this step forward in minimal invasive surgery. 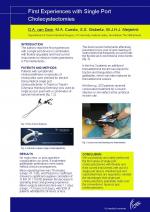