Conclusions: Fibrin sealants do not seem to prevent postoperative pancreatic fistula following pancreatic resections. Based on the current available evidence, fibrin sealants cannot be recommended for routine use in pancreatic surgery. 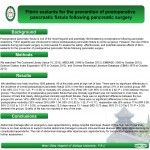