Methods: The International Hernia Mesh Registry, a prospective, multinational database, was queried for patients undergoing FH or IH repair from 2007-2013. Demographics, comorbidities, operative details, complications and QOL as measured by the Carolinas Comfort Scale (CCS) were captured. Stratified analysis was performed according to gender utilizing Chi-square, Fishers, and Wilcoxon-Mann-Whitney Tests where appropriate.

Conclusion: Femoral and inguinal hernia repair have similar long-term outcomes for men and women in regards to complications, recurrence and QOL regardless of laparoscopic versus open repair, type of anesthesia, and patient comorbidities. 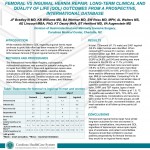