Feasibility of transumbilical lung wedge resection in a canine model

BACKGROUND: Chronic wound discomfort and intercostal neuralgia are well-known postoperative complications of video-assisted thoracoscopic surgery (VATS). To explore the possibility of a surgical platform that would cause less postoperative discomfort and avoid these complications, this study evaluated the feasibility of transumbilical lung wedge resection in a canine model.

METHODS: Twelve dogs (4 in the nonsurvival group and 8 in the survival group) were used in this study. Transumbilical thoracoscopy was performed using a homemade metallic tube via umbilical and diaphragmatic incisions with the animal in a supine position. After thoracic exploration, wedge resection was performed on the lung using an endoscopic stapling device placed through the transumbilical and transdiaphragmatic incisions under direct bronchoscopic guidance. The animals were sacrificed 30 minutes after the procedure (nonsurvival group) or 14 days post-surgery (survival group) for necropsy and histological evaluations.

RESULTS: Eleven pre-planned lung wedge resections were completed in a median time of 101 minutes (range, 65–175 minutes) with one exception due to inadequate stapling in the early phase of the experiment. There was 1 death directly related to postoperative massive airleaks and sepsis in the survival group. The other 7 animals had an uneventful postoperative period. Necropsies at 2 weeks after surgery confirmed successful lung resections and revealed no evidence of vital organ injury. Two animals exhibited complete healing of the diaphragmatic incision. Liver herniation was identified in 1 of 5 animals with partial wound healing.

CONCLUSION: This preliminary animal study demonstrates that large lung wedge resection can be performed with mechanical staplers via a single transumbilical incision. Future studies will investigate the cardiopulmonary and immunologic effects of transumbilical VATS compared with conventional VATS. 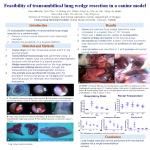