Natural Orifice Transluminal Endoscopic Surgery is an evolving technique reducing the access trauma. Transvaginal cholecystectomy and transvaginal anterior resection has been shown to be safe and feasible. Postoperative pain is reduced and recovery enhanced compared to conventional laparoscopic surgery. The transrectal access for anterior resection in diverticular disease promises similar advantages. Yet, its feasibility and safety have not been well studied.

Operative data and outcome of a consecutive series of 27 patients undergoing Hybrid-NOTES transrectal anterior resection have been prospectively recorded and analyzed.

22 men and 5 women with a median age of 56 years (interquartile range 44-64) underwent Hybrid-NOTES anterior resection. Median time of surgery was 155 minutes (IQR 131-180). In 4 men (15%) with a bulky mesenterium it was intraoperatively decided not to perform a transrectal specimen removal and a Pfannenstiel incision was performed. Median BMI was 23 (22-24) kg/m2 and 29 (26-31) in converted patients. In 3 patients (11%) before transrectal specimen extraction the mesenterium was divided from the sigmoid colon due to a bulky specimen. In one women with an acute stenosing diverticulitis with consecutive ileus and severe adhesions in the small pelvis after hysterectomy transrectal access was felt to be impossible. Median level of anastomosis was 12 cm above dentate line (range 10-14). Preoperative median level of CRP was 4 (4-5) mg/l, on the second postoperative day 127 (82-190) and 51 (36-88) on the fourth day. There were 4 (15%) postoperative complications: urinary retention in one patients (Dindo-Clavien grade 1), addison crisis requiring corticosteroids (grade 2), local pelvic peritonitis requiring laparoscopic lavage (grade 3b) and one patient with anastomotic dehiscence underwent laparotomy and received an end colostomy (grade 4a). Median hospital stay was 7 days (IQR 6-8).

Conclusions
Transrectal Hybrid-NOTES anterior resection is feasible with a reasonable complication rate. Especially in men and obese patients the feasibility is limited by a size mismatch of the diameter of the rectum and the specimen. In case of bulky specimen transrectal removal might be difficult. Dividing the mesenterium from the colon sigmoideum in order to minimize the diameter before transrectal extraction should be considered. Further studies focusing on postoperative recovery, pain and functional outcome are awaited. 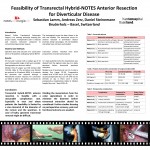